Paul Conway on Joystick -“Adventure games will continue to evolve into other genres”. 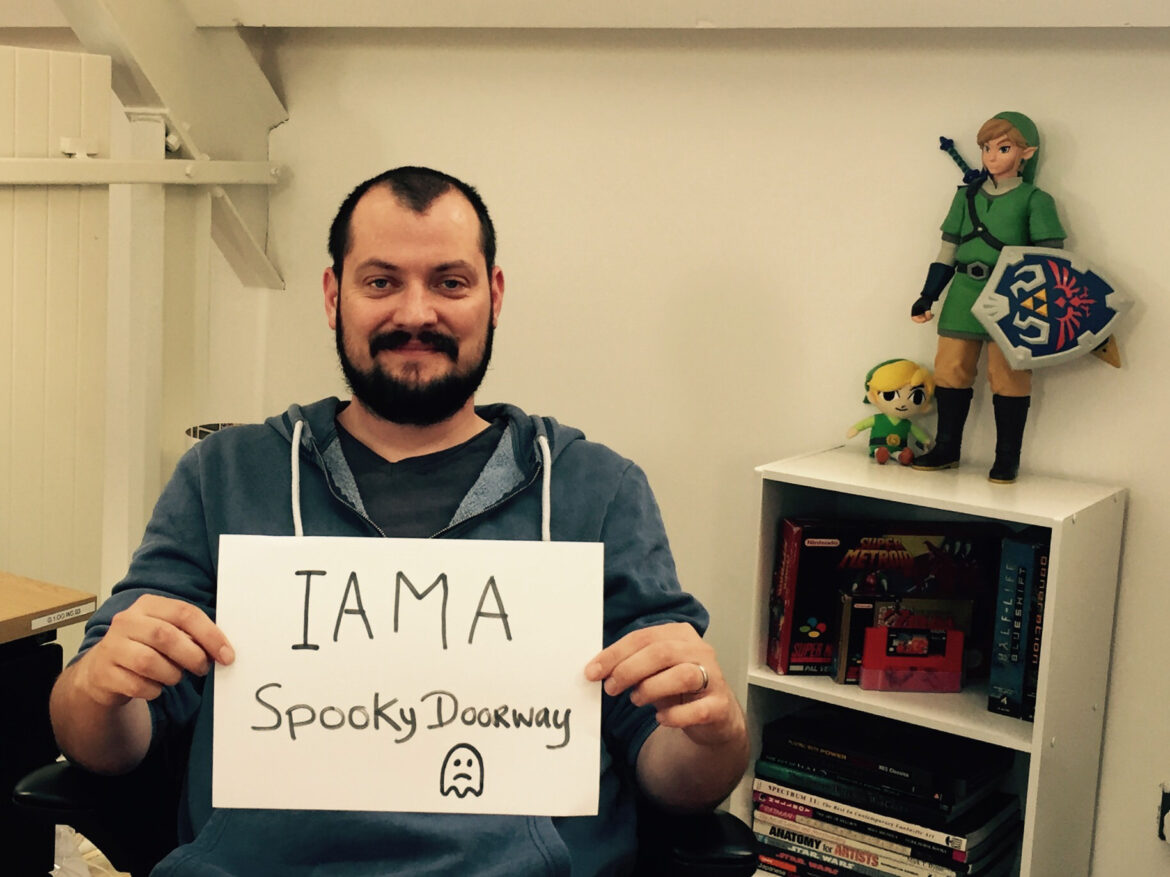 The Darkside Detective was one of those games that I discovered when it was first released as a demo on some indie games platform and fascinated me with its humor, among others. I wanted it to succeed and any of my concerns, which are usually met, were solemnly refuted as the community embraced it and is still asking for even more McQueen and Dooley adventures. Until then, enjoy the interview given to me by Paul Conway, co-founder of Spooky Doorway based in Galway City, Ireland. I thank him warmly.

So, Paul, can you tell us a few things about yourself, your work in the video game industry in general and, finally, about Spooky Doorway?

Hi there, I’m Paul Conway. I’m a video game artist, best known for my pixel art and low poly graphics. I’ve been working in games since 2005, when I started working on java phone games. I’ve freelanced for many years and work on about 120 different indie and mobile games.

Spooky Doorway was initially formed in 2015 when we started working on The Darkside Detective. We needed a company to sell the game on Steam, so we (Dave McCabe, Treasa McCabe and I) set it up, and the company has been going strong since then.

The Darkside Detective has a phenomenal sense of humour; weird characters, wacky dialogues, super trippy riddle solutions. Do you think that is more difficult for a video game developer to find a successful way in order to approach his/her audience via the language of humour?

Humour is certainly hard to achieve in video games, especially ones without voice acting. Games move along at each player’s individual pace and as a result we can’t control the timing and sequence of our jokes. We can’t guarantee when and in which order players will experience everything so we have to set up situations which are inherently funny no matter how you approach them.

Luckily we’ve got Dave McCabe as our lead writer. The team all contribute a little to the jokes here and there, but Dave’s unique voice shapes the majority of the humour in The Darkside Detective. He has a distinct gift to be able to turn simple and everyday scenarios into the most silly and bizarre moments.

Humour is ultimately subjective and it’s unavoidable that some of our jokes can fall flat for certain players. Comedy can work against you if it’s the main focus of your game and nobody is laughing, but we’ve been lucky enough with our brand of silly but wholesome spooky comedy. A lot of players really enjoy our jokes and bizarre stories. It’s always fun to see them shared on social media.

I know that the first thing they ask you about The Darkside Detective is for the elements and easter eggs from tv series like The X-Files and Twin Peaks. The X-Files has some humourous episodes here and there but Twin Peaks had a bizarre Lynchian sense of dark and cynical humour all the way. The Darkside Detective is following the neo-mythology of the occult and the paranormal in pop culture. Why do you think we like this kind of concept, even humourously, especially in video games?

In my opinion these concepts work in games, TV and other media because they have a foot in both the world of the strange and the normal in equal measure. It’s fun to think that these strange ghouls and doppelgangers could be out there hidden in our everyday lives, waiting for us at bus stops or in the laundrette on a Sunday. Twin Peaks and the X-Files are quite odd at times, but their strange content is seen through the lens of the real world. I think that familiarity makes the strangeness stand out and feel richer.

We put these themes and settings into The Darkside Detective because we loved them. The X-files, Twin Peaks and similar old TV shows and movies left a big impression on us all, and it was very natural for us to set an adventure game in a world like that. Many games have done it before us, but we felt we could put our own unique spin on them through McQueen and Dooley’s investigations.

Are there any video games that you admire and would love working for? Any favourite consoles or home computers?

I personally really admire Alan Wake. I’m delighted to hear it’s finally getting a full sequel. It fits snugly into the strange and normal blend I mentioned before. It has a great setting and a super interesting Stephen King style story mixed with some tight combat. I’m also a fan of the Silent Hill and Resident Evil series. Both series’ have had their duds, but when those games work, they’re magic. I would really love to have the chance to work on a game similar to Alan Wake or Silent Hill, but with a stronger focus on the player influencing the outcome of the story, like a more traditional adventure game.

As for favorite consoles or home computers, I’m a big fan of the Nintendo Switch. It’s a super little console that fits really well into my life. I somehow find more time to play on handhelds than traditional consoles or desktops. I love my PS5 and my PC, but more and more I find myself picking up the Switch. I’m looking forward to when the Steam Deck arrives in Ireland, as I think it has a good chance of usurping the Switch.

Adventure games are on some kind of existential crisis during the last years. Nevertheless, there is a great number of developers, indie mostly, who are making remarkable adventure games. Most of them do not have any financial help or media attention which is unfortunate. What’s your comment about this situation? Also, what do think about the future of adventure games in general? Are you optimistic about our favourite genre?

I think adventure games are a great genre to make games for. From a developer standpoint, the mechanics of traditional point and click are not too technically challenging to create, you just need a good story, good characters and some fun design. This really helped us when we were making our first Darkside Detective game in our spare time without any budget. It’s a genre I’d advise a lot of first time devs to try out.

The audience for adventure games is certainly smaller compared to other genres, like platformers or shooters, but they are engaged and eager players. They want to hear about what new games are coming out and are willing to try a lot of them. I don’t feel like I’m in competition with other adventure game developers. I think the audience has made it clear there is room for all of us.

I wish adventure games were covered better by the media, though, but their resurgence in recent years has continued. There are a lot of great modern games out there made by some really nice people, and there’s even a new Monkey Island on the way later this year.

Any future plans for the next adventures of the dynamic duo, Detective McQueen and Officer Dooley?  The Darkside Detective: A Fumble in the Dark was a successful sequel!

Thanks! A Fumble in the Dark has been a solid second game for us, and we’re going to be sorry to see the end of it when we release the last case.

We’ve always envisioned the Darkside Detective games as a trilogy at least. We’ve had a loose trajectory for that set out for them since we came up with the idea for the game. There are loose designs and story ideas already written for another game. We might not jump back into the series again straight away however as we have other projects we’re working on, but you can expect Dooley and McQueen to return.

The art on both games is amazing; the music, the script and, finally the pixel art! Could you tell us a little about them? Why did you decide to use a pixel art style for the series?

Thanks, the visual style of The Darkside Detective kind of came about by accident in the game jam when the first game demo was put together. The big pixel low resolution style was simple and quick to do on the day.

Less pixels meant less work so to speak. And adding some juicy HD lighting gave it a real sense of atmosphere and character. The style almost arrived fully formed. It’s evolved and been refined a little over the course of the two games, but there are still some sprites in there from the first game jam project.

Regarding the music, we love the soundtracks on both games. Ben Prunty and Thomas O’Boyle are two amazing composers, and each brought a unique personality to each game they worked on. I truly believe the games would not have been as successful as they have been if it weren’t for their contributions. The ‘80s inspired synth sound adds so much to the atmosphere. We knew from early on that stock music would not be enough, we needed to work with really good people to give the game the sound it needed.

Could you tell us a few things about the upcoming Eldritch House? I presume you are a Lovecraft fan as well?

It’s still in the very early stages of development so there’s not a lot we can say about Eldritch House right now other than it is a first person narrative adventure presented in a 3D comic book style. Players must investigate the disappearance of a young woman and the supernatural occurrences at a remote hotel in the West of Ireland in the latter end of the 19th century. As for how all that will play out, you’ll just have to wait and see.

We are fans of Lovecraftian stories, and Eldritch House certainly fits within that style of story. But the game is equally inspired by Irish Mythology, old detective novels like Agatha Christie’s stories, and the works of Mike Mignola. It will have its own story unrelated to the works of Lovecraft, but Lovecraft fans will most certainly enjoy what we’re cooking up.

I always ask developers, especially the ones on adventure games, if they like reading books. So, does Paul Conway read? Any favorite writers?

I do like reading, but have less time to do it these days than I’d like. There are too many games to be played and made. I do try to keep up with anything by Stephen King, Joe Hill, Clive Barker and Neil Gaiman, though.

I’m a big comics reader, too. I love Mike Mignola’s work a lot, which was one of the reasons Eldritch House came into existence.

A new Monkey Island game has been officially announced. Any thoughts about it? Excited or sentimentally restrained?

I think it’s great news. I’m delighted that Ron Gilbert has gotten the chance to return to the franchise. I’m really excited for him and the team. I think it will be great, and I hope it sells a lot of copies.

Thank you so much, Paul! Do you want to say something to your Greek fans out there?

Thanks for the interview. I hope your readers enjoy reading my rambling thoughts about adventure games. I love Greece, it’s a lovely country I’ve visited a few times. I have friends in Athens andI hope to make it back there soon!